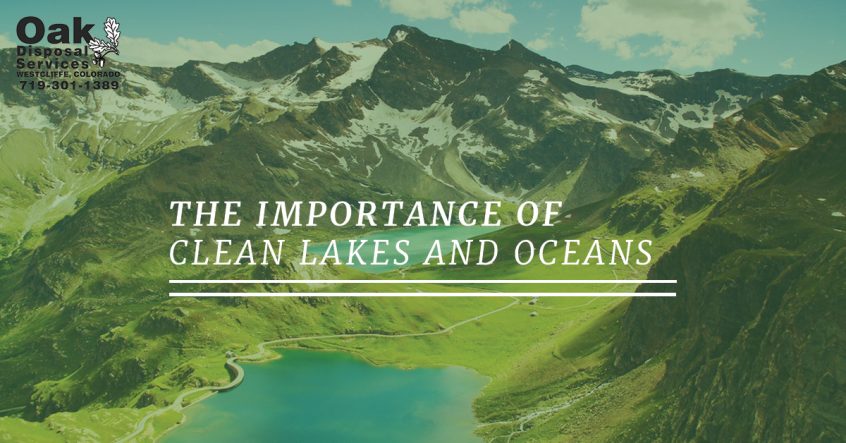 In our blogs, we’ve talked a lot about residential and commercial trash clean up and the benefits to our community and the world. However, what’s the importance of keeping our water sources free from debris and contamination? There’s a lot more to it than just making a water source look nice, and cleaning them will help every living being on the planet, not just fish. In this blog, we’ll talk about just some of the many reasons we all have an obligation to keep our lakes and oceans clean.

As adults, many of us have fond memories of spending time at a lake or on the beach. Even if we don’t live near a major water source, we’ve all taken vacations to relax in the sun and play in the water. Maybe it’s so mesmerizing to us because it’s so different from the environment we live in on a daily basis. Although lakes and oceans are completely different ecosystems, it doesn’t mean that they don’t face some of the same issues as we do in our ecosystem.

When it comes to waste, both humans and sea life are affected by its intrusiveness. Have you ever gone to the beach looking for the perfect place to hang out only to find that it’s covered in trash? Or have you gone out for a lake day with your friends, only to realize that you aren’t allowed to swim because of how polluted it is? However, this issue is affecting other animals a lot more than it’s affecting us. If we over-pollute one area, we have the ability to move to another. On the other hand, for fish and other animals that depend on lakes and oceans, it’s not that simple.

It kills fish and mammals

When a fish or marine mammal encounters debris in the water, they often mistake it for food or get tangled in it and die. The sad part is that the large majority of the trash in oceans and lakes is food containers, something that could be easily avoided if everyone did their part to avoid littering.

Litter is also responsible for the death of one million birds and 100,000 marine mammals every year. Seabirds depend on the ocean as their main source of food, and in order to hunt fish, they need to be able to see them. With litter floating on the water, this is nearly impossible, and when they try, they are often entangled in debris, dying as a result.

Have you ever read up on the life of sea turtles? It’s estimated that only one out of every thousand sea turtles survives to adulthood due to predators and other natural means. Litter only compounds this issue and is a major contributor to the endangerment of sea turtles, along with other human activity.

Overall, littering has a huge impact on lakes and oceans and it’s not just harmful to fish and marine mammals, but it affects our comfort and safety. Oak Disposal is committed to promoting a clean and healthy environment for everyone with its commercial waste disposal. Contact us today to find out more about our trash collection services!